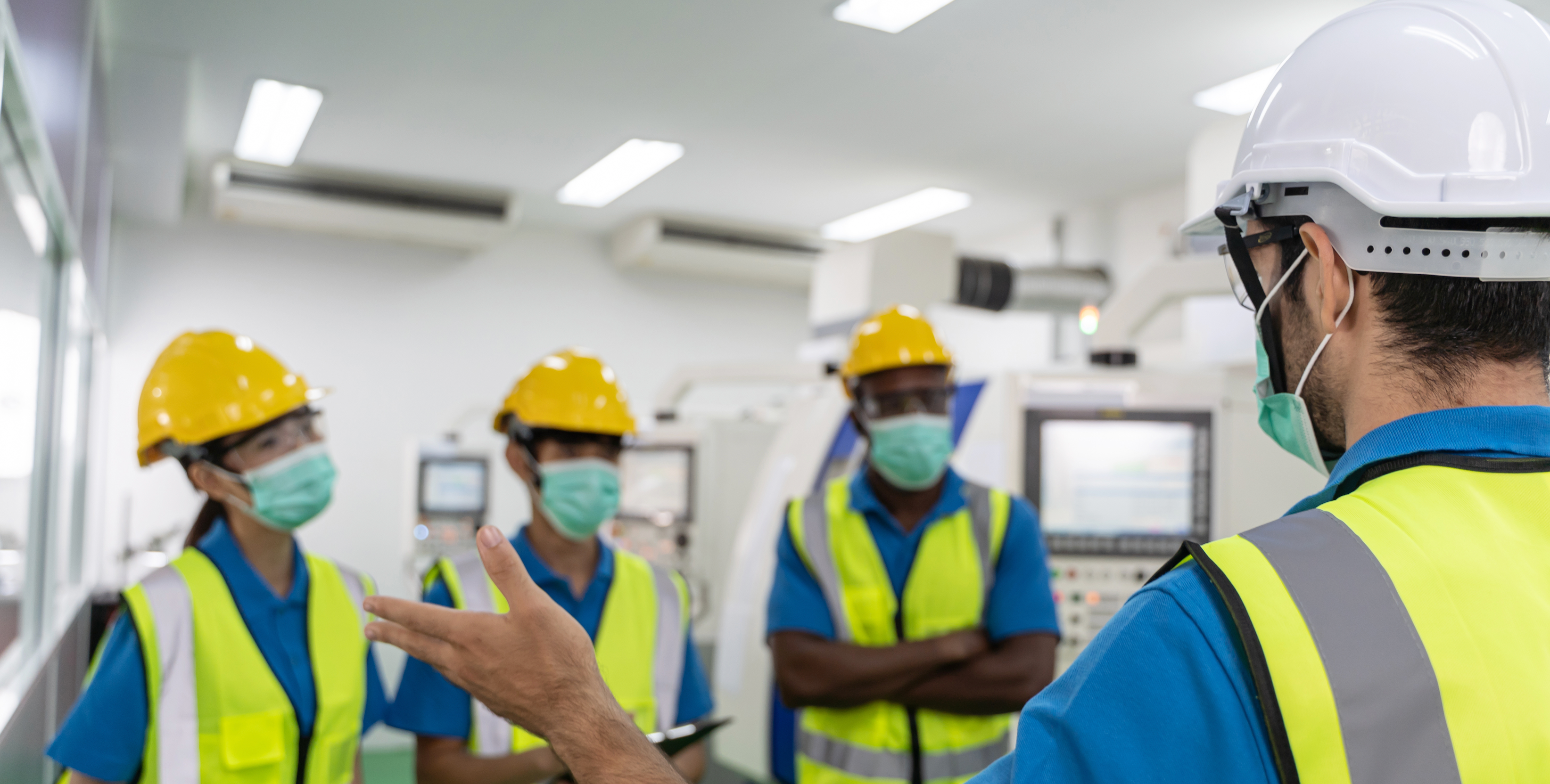 Power relates to the possession of control, authority, or influence over others; it has many dimensions. The concept of power, and specifically, the misuse of power, is central to understanding the causes of sexual harassment.

In the workplace, power dynamics are commonly thought to be associated with an individuals’ seniority, age or value to a business. For instance, a harasser might be in a position of power due to being the owner of a business, a valued customer of a business, a direct supervisor of a person harassed, or in a position to influence that person’s future career prospects.

Sexual harassment is recognised at an international level as a form of violence against women, with many of the same underlying drivers as other forms of violence against women. Gender inequality occurs when power, opportunities and resources are not shared equally between men and women in society and when women are not valued and respected as much as men.

The unequal distribution of power, resources, opportunity, and value afforded to men and women in a society due to prevailing gendered norms and structures.

Gender inequality is also created by attitudes, norms and behaviours that suggest that heterosexuality is the normal or preferred sexual orientation and that people’s preferred gender identity is the one they are born with (cisgender). These norms, attitudes and behaviours have an impact on how people understand binary gender roles and gendered norms in society. There are other aspects of the social context that are also relevant to an understanding of violence against women.

Gender inequality cannot be disentangled from other social injustices because gendered inequality frequently intersects with other forms of structural and systemic discrimination, inequality and injustice. This means that the value afforded to women and men is not afforded in the same way for all women or all men, and that our society, institutions and organisations are shaped by those intersections. These intersections also influence the prevalence, dynamics and impacts of violence against women.

Consider the graphic below  - gender inequality lies below the surface driving sexual harassment.

Sexual harassment experienced in the workplace

A key factor that drives sexual harassment of all people, regardless of their gender, are norms, practices and structures in society that shape (and are shaped by) gender inequality.

Gendered norms: the most common and dominant ideas, values or beliefs about gender in a society or community. This includes ideas about what is ‘normal’ in relation to gender, and beliefs about what people should do and how they should act—for example, the belief that mothers should be the primary carers of children, and the expectation that ‘boys don’t cry’.

Gendered practices: the everyday practices and behaviours that reinforce and maintain gendered norms—for example, parents telling boys to ‘toughen up’, or the over-representation of women in the childcare sector.

Gendered structures: the laws and systems that organise and reinforce an unequal distribution of economic, social and political power, resources and opportunities between men and women—for example, lower pay rates in female-dominated sectors such as child care.

Change the Story is an initiative from Our Watch that provides an evidence based framework for preventing violence against women. This can be used as a basis for understanding the drivers of sexual harassment and for taking action to address it.

Blame can be shifted to the victim of the workplace sexual harassment, which sends a strong and clear message that the workplace condoned the behaviour.

Click on the link below to consider what actions you can take to address driver 1. 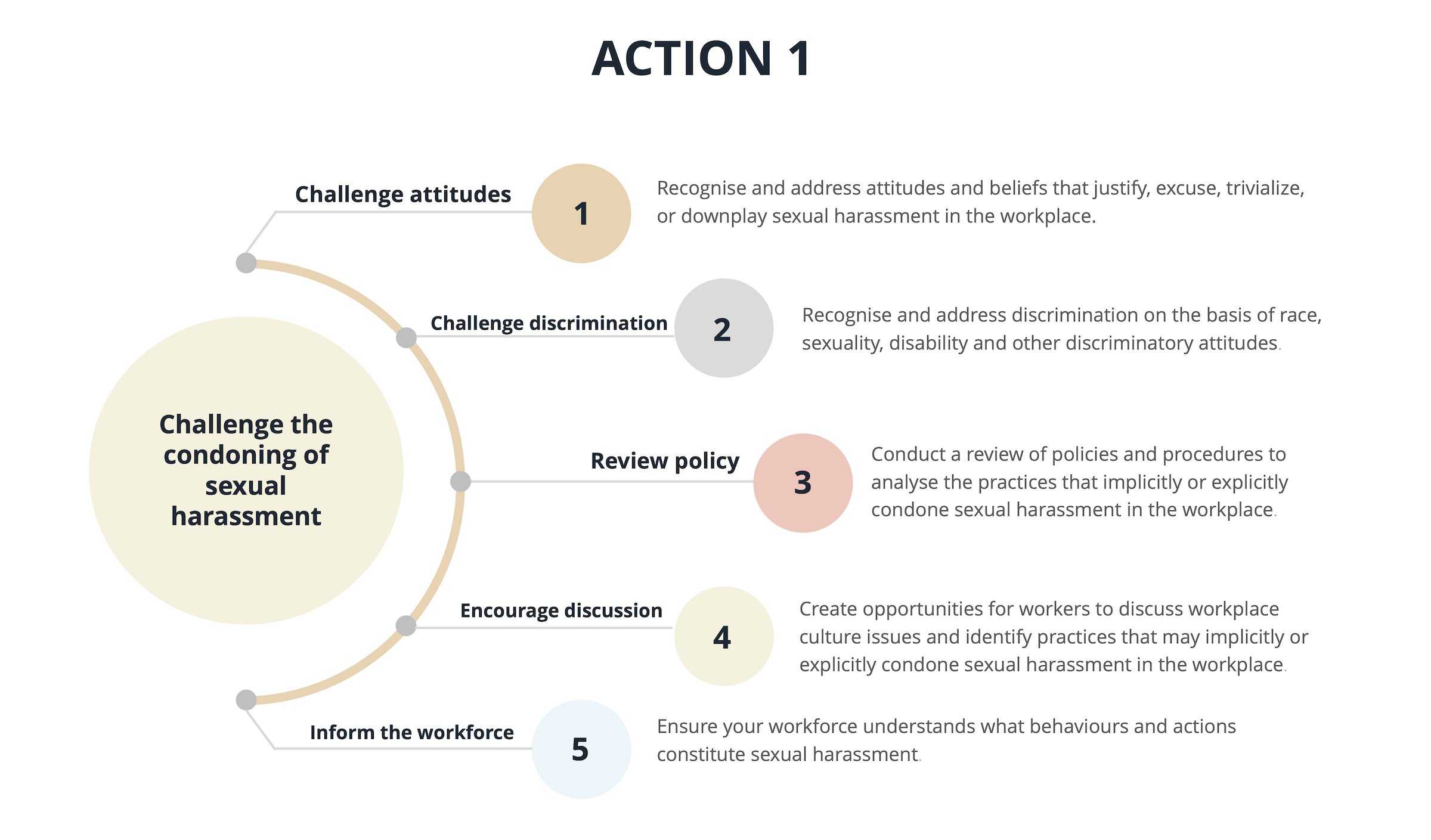 The way in which power is distributed between men and women in the private and public spheres, including in the workplace, is an important dimension of gender inequality. Evidence has suggested that men’s dominance of decision-making in public and private life, and limits to women’s autonomy, may contribute to sexual harassment against women for several reasons, including:

Click on the link below to consider what actions you can take to address driver 2. 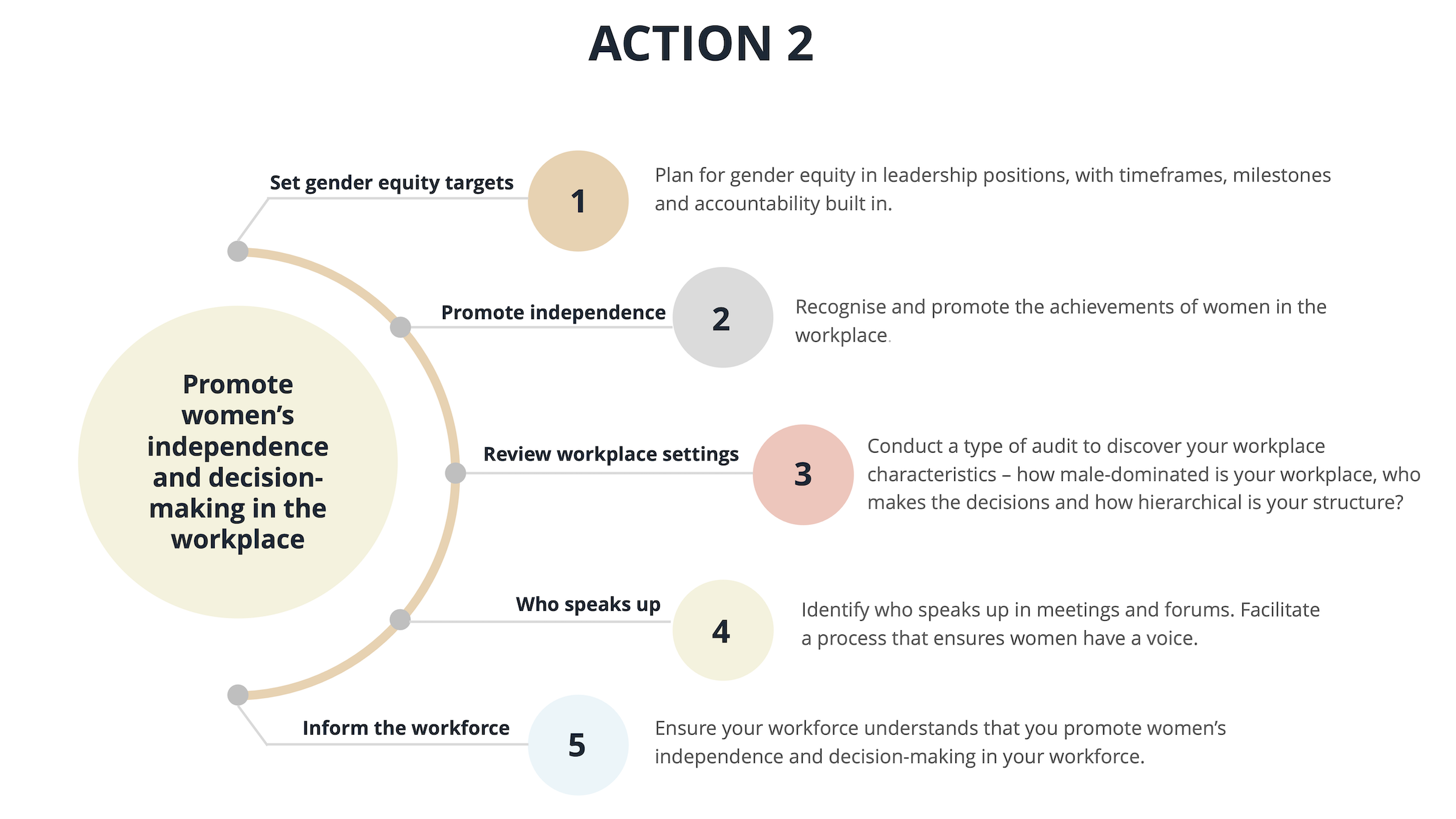 Driver 3: Rigid adherence to gender roles and stereotyped constructions of masculinity and femininity

A strong belief in stereotyped constructions of ‘masculinity’ and ‘femininity’ and rigid distinctions between the roles of people are consistently associated with higher levels of sexual harassment against women. These stereotypes relate to the idea that people are ‘naturally’ suited to different tasks and responsibilities and have naturally distinctive personal characteristics.

This influences how people believe ‘proper’ or ‘real’ men and women should think, feel, and behave. Dominant forms of masculinity are associated with characteristics such as strength, independence, confidence, and aggression, while femininity is associated with sensitivity, passivity, dependence, and moral purity. Gender stereotypes affect the way in which roles and responsibilities are distributed between men and women in the family and in public life, including at work. Gender stereotypes contribute to gender segregation in the workforce with, for example, a far higher proportion of women than men in lower-paid ‘caring’ work such as childcare and aged care.

Click on the link below to consider what actions you can take to address driver 2. 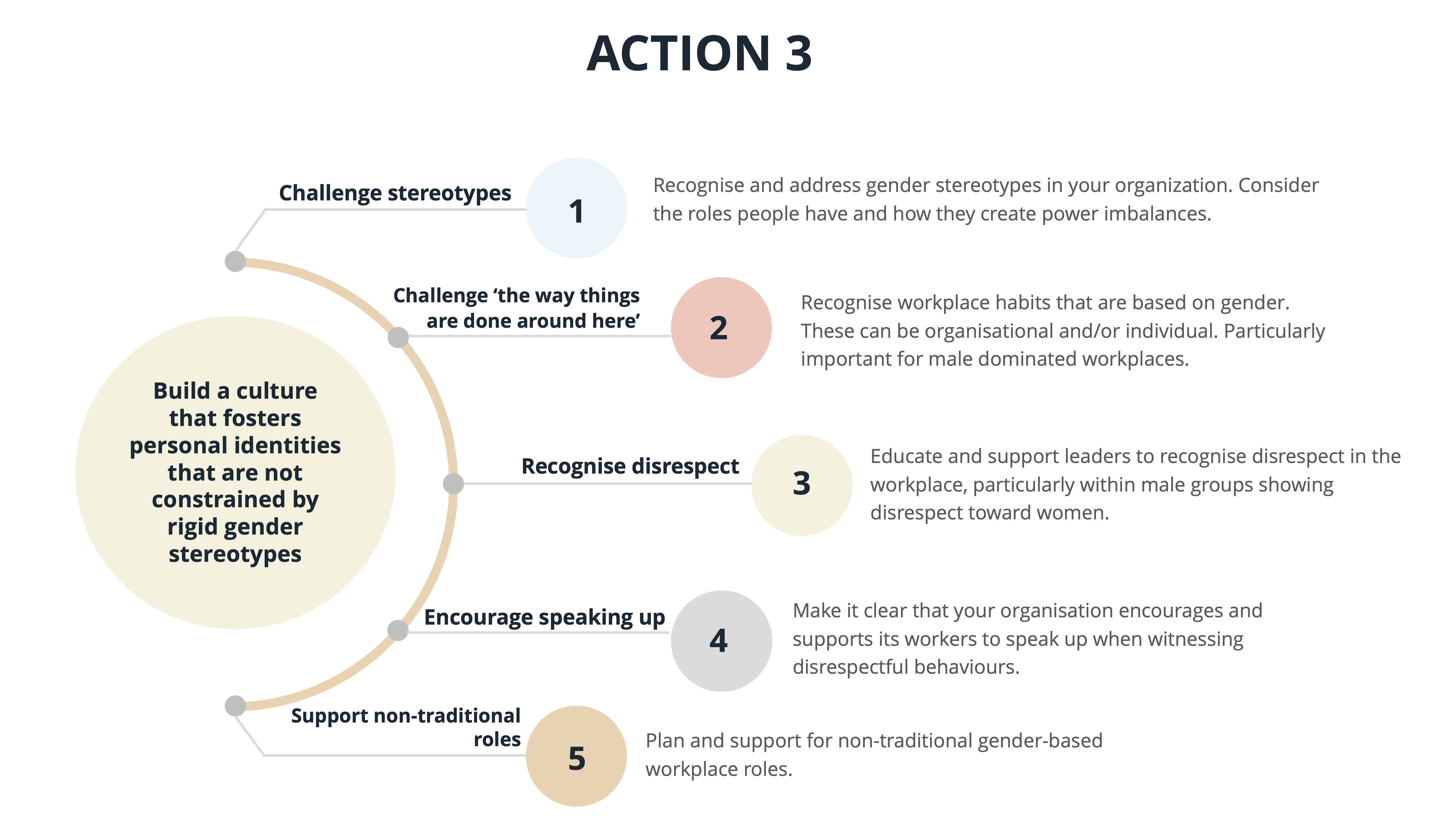 Male peer relations (including in a work context) that reinforce stereotypical and aggressive forms of masculinity are also associated with higher levels of sexual harassment against women, as they can create disrespect for, objectification of, or hostility towards women. Research has suggested that this may occur because:

Research has found that when men participate in sexist jokes and commentary, this ‘forms a type of in-group bonding and reinforces stereotypical or “traditional” masculine identities.’ When attitudes and behaviour that emphasise disrespect towards women, such as sexual harassment, become normalised within a workplace, women as well as men may stop questioning the behaviour. Negative male peer relations can contribute to an environment where workers and workplace leaders are unwilling to challenge disrespectful attitudes and behaviours for fear of exclusion or reprisal.

Click on the link below to consider what actions you can take to address driver 4. 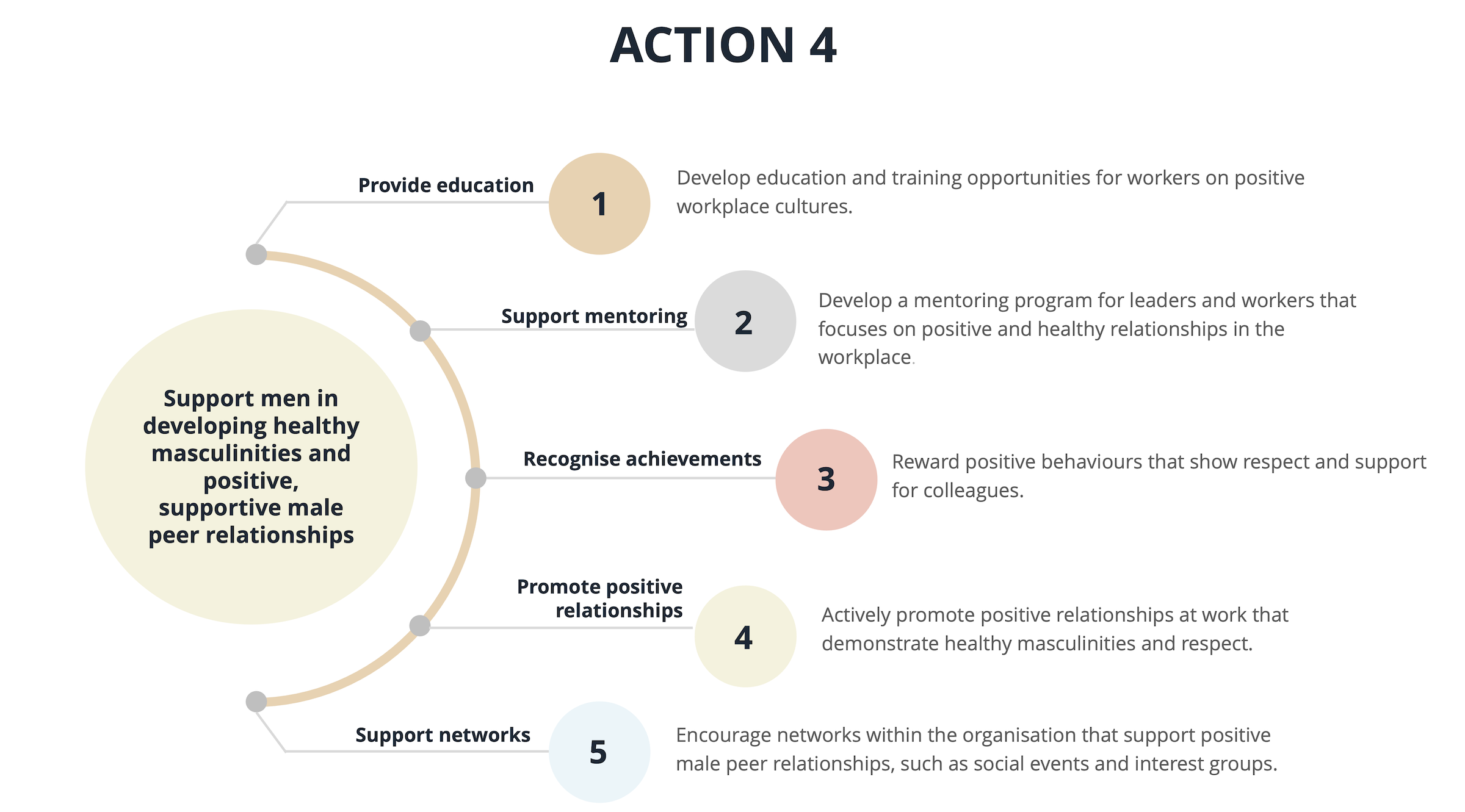 You can download the slide deck of the gendered drivers of sexual harassment for your use in the sidebar on this page.

Respect@Work acknowledges the Traditional Custodians of Country throughout Australia and their continuing connection to land, waters and community. We pay our respects to Aboriginal and Torres Strait Islander cultures, and to Elders past and present. Aboriginal and Torres Strait Islander peoples should be aware that this website may contain images and voices of people who have died.